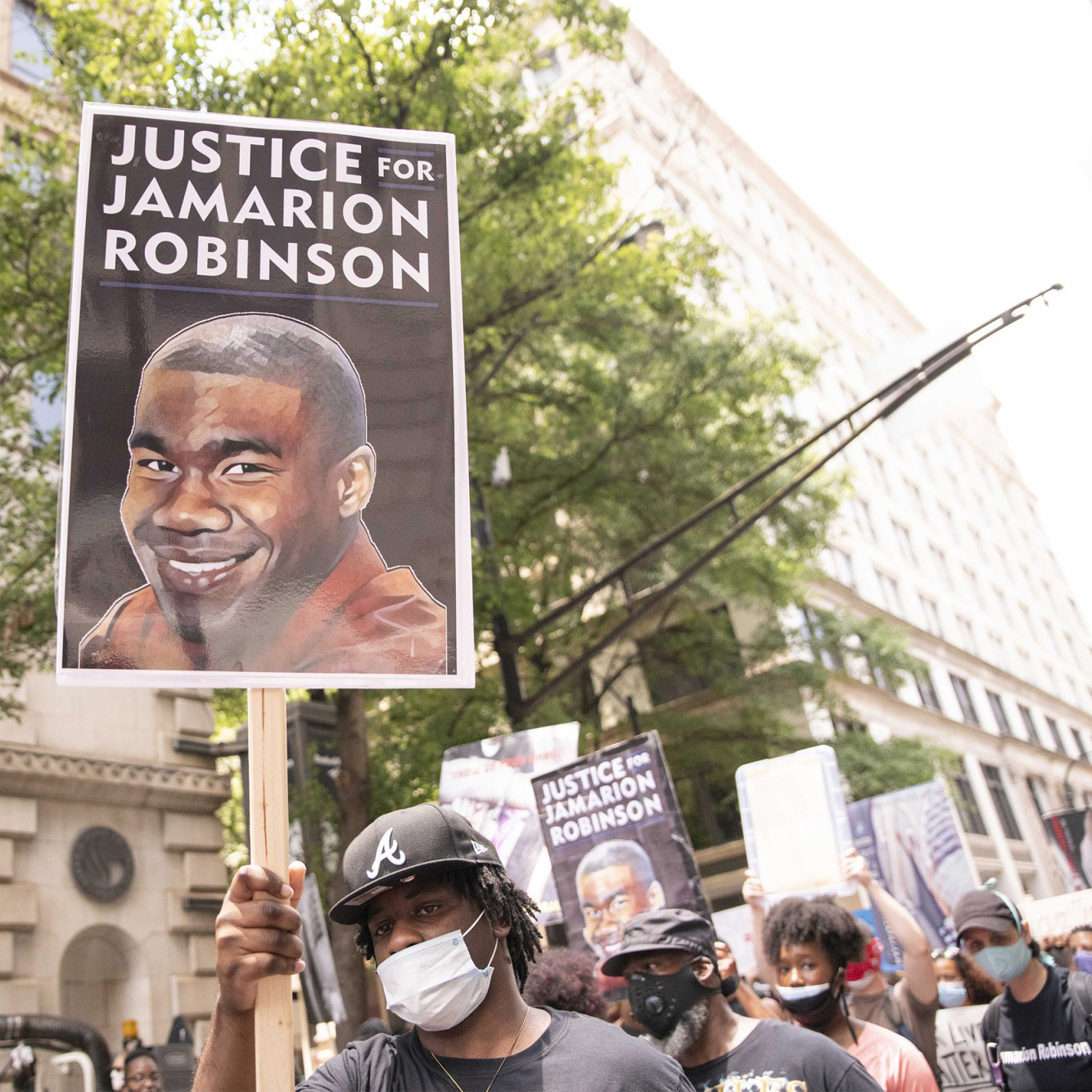 Protesters march through the streets of Atlanta to call for the arrest of police officers involved in the killing of Jamarion Robinson in Atlanta, on June 20, 2020.Steve Eberhardt / ZUMA file.

The indictment of a deputy U.S. marshal and Georgia police officer in the killing of Jamarion Robinson was applauded by his family. Experts say the case will most likely fail.

Monteria Robinson felt vindicated when local prosecutors filed felony murder charges last week against two officers in the killing of her mentally ill son, who was shot 59 times in an Atlanta-area apartment in 2016.

“What happened to my son was very heinous,” Robinson told NBC News. “We demand accountability.”

The officers — Eric Heinze, a deputy U.S. marshal, and Kristopher Hutchens, a Clayton County police officer — were working for a federal fugitive task force at the time they shot Robinson’s son, who the officers say brandished a weapon and presented a deadly threat.

The task force, one of dozens across the country, is made up of federal agents and local cops deputized with federal powers to cross state lines and track down people wanted on arrest warrants.

The case marks what is believed to be the first time that a member of the U.S. Marshals Service has faced charges for a fatal shooting while on duty, an agency spokesman said.

But prosecutors have a steep hill to climb in securing a conviction for the two officers, or even a minor charge that sticks, according to former federal officials and civil rights lawyers.

A complex web of decades-old U.S Supreme Court rulings and federal laws makes it exceedingly difficult for local prosecutors to successfully charge federal agents after a deadly encounter, even if they seem to have violated state law.

“The courts have created a number of special protections that shield these officers from any sort of accountability,” said Patrick Jaicomo, an attorney with the libertarian Institute for Justice who has argued before the U.S. Supreme Court for more accountability over federal law enforcement.

The first obstacle confronting local prosecutors is the Supremacy Clause of the Constitution, which says that states must defer to federal law. Federal judges have long accepted the argument that it shields federal agents from state prosecutions when an incident occurred while they were on duty, legal experts say.

Lawyers for the officers have already filed federal court papers and succeeded in getting the case transferred from state to federal court. In such cases, federal judges typically dismiss the charges on the grounds that state prosecutors cannot charge federal actors for state crimes, said Jaicomo and other experts.

Roy Austin, a former deputy assistant attorney general under President Barack Obama, said even if a federal judge decided to take on such a case, prosecutors would face another enormous hurdle unique to the federal system: proving that a law enforcement officer is guilty of “willfully” depriving someone of their civil rights.

Congress failed to pass a sweeping police reform bill this year that would have amended the law by changing “willfully” to “recklessly” violating a person’s rights.

As is, Austin said, the bar is too high.

“Basically a law enforcement officer can get away with murder and not face repercussions,” Austin said, speaking broadly about the federal standard. “It absolutely needs to be reformed.”

In recent years, increasing numbers of police officers have been charged in line-of-duty shootings or deaths. But no experts contacted by NBC News could identify a single case of a federal agent being convicted for killing someone in the line of duty.

That the Georgia man, Jamarion Robinson, 26, allegedly had a gun further complicates the task ahead for Fulton County prosecutors, experts said.

“This is a hard case, but it doesn’t change the principle of the problem,” said Jonathan M. Smith, who oversaw investigations into abusive local police departments for the Justice Department under the Obama administration.

The shooting took place in August 2016 when the task force members were serving an arrest warrant for Robinson, who was wanted on charges of attempted arson and aggravated assault of a police officer.

Robinson, a former star football player who suffered from schizophrenia, was struggling with his mental health in the weeks before the incident, according to his mother.

In July, she called police after he poured gasoline on the floor inside her home, leading to the attempted arson charge. A few weeks later, Robinson allegedly pointed a gun at two Atlanta cops after someone called 911 to report that he was harassing residents of an apartment complex, police say. He was not arrested.

The Atlanta Police Department then contacted the U.S. Marshals Southeast Regional Fugitive Force for help to track down Robinson. A task force officer called Monteria Robinson and asked if she knew where her son had gone, U.S. Marshals documents show. She told the officer that her son was off his medication and increasingly unstable.

At around 1:25 p.m.on Aug. 5, 2016, the task force members armed with flash bang grenades and a surveillance robot showed up outside the home of Jamarion Robinson’s girlfriend in East Point, Ga., according to a Georgia Bureau of Investigation probe into the shooting.

A neighbor’s cellphone video appears to show officers standing outside the entryway with their guns drawn as one yelled, “Throw the gun down.” Within seconds, gunfire erupted.

Heinze and Hutchens fired at Robinson, according to the state probe. Heinze told investigators that Robinson had pointed a gun at him. A .380 firearm was later recovered near Robinson’s bullet-riddled body, according to court papers.

His family disputes that he had a gun.

A medical examiner’s report documented 76 gunshot wounds but did not specify how many were exit wounds. Court papers filed by the then-Fulton County district attorney and Robinson’s family said he was shot a total of 59 times.

His family filed a wrongful death suit against the officers, but a federal civil judge sided with law enforcement  earlier this year saying that the shooting was justified.

Then came the news last Tuesday that a Fulton County grand jury handed down an eight-count indictment against Heinze and Hutchens, charging them with felony murder as well as aggravated assault, first-degree burglary, making false statements and violating the oath of a public officer.

Don Samuel, Hutchens’ lawyer, said he expects the criminal case will remain in federal court since it’s clear that the officers were working as federal agents facing off against an armed fugitive.

“The Supreme Court has said that a state cannot prosecute a federal officer who is acting in the line of duty,” Samuel said. “The DA, to put it bluntly, is more interested in the politics of having indicted law enforcement rather than really looking at the evidence.”

Jeff DiSantis, spokesman for the Fulton County District Attorney’s Office, declined to comment on whether prosecutors were gearing up for a legal battle to keep the case in state court.

“He was facing a serious deadly threat and was serving a valid arrest warrant,” said Heinze’s lawyer Lance LoRusso.

The Supreme Court ruled in 1890 that a California sheriff couldn’t jail a deputy U.S. marshal who shot a man on a train while trying to protect a judge. The justices argued that state authorities couldn’t imprison a federal officer for an incident that occurred while he was performing his official duties.

Federal agents and task force officers have pointed to the century-old case as the legal basis for why they can’t face local charges. In 2018, the court declined to take up an appeal of a case in which local prosecutors were seeking to charge an Austin police detective for fatally shooting a man while serving as a member of a federal task force.

The court’s influence, law enforcement officials argue, is even more pronounced as hundreds of police departments embed their officers within a network of federal task forces across the country. The U.S. Marshals estimate that about  3,500 local cops are part of their federal teams. Even more are partnered on task forces with the FBI, ATF, and DEA.

A separate battle between local prosecutors and the federal courts is playing out in Virginia. In October 2020, the commonwealth attorney in Fairfax County filed manslaughter charges against two U.S. Parks Police officers accused of fatally shooting an unarmed motorist after pursuing him following a minor accident in which his car was rear-ended.

The officers asked a federal judge to take the case, arguing that the Constitution protects federal law enforcement from facing state charges. The judge dismissed the case earlier this month. Local prosecutors recently filed an appeal.

“We do not believe the law allows an individual to circumvent the accountability of the criminal justice system simply because of who their employer is,” said Charlotte Gomer, spokesperson for Virginia’s attorney general.

Robinson’s mother said she has faith that local prosecutors will fight to keep the case related to her son’s killing. If it goes to a federal judge, she said she will not stop pressing for justice.

Previous Legal Precedents or Reparations? Lawsuit Against Harvard May Decide Who Owns Images of Enslaved People
Next More Than $1 Million Raised to Help Missouri Man Exonerated After 43 Years