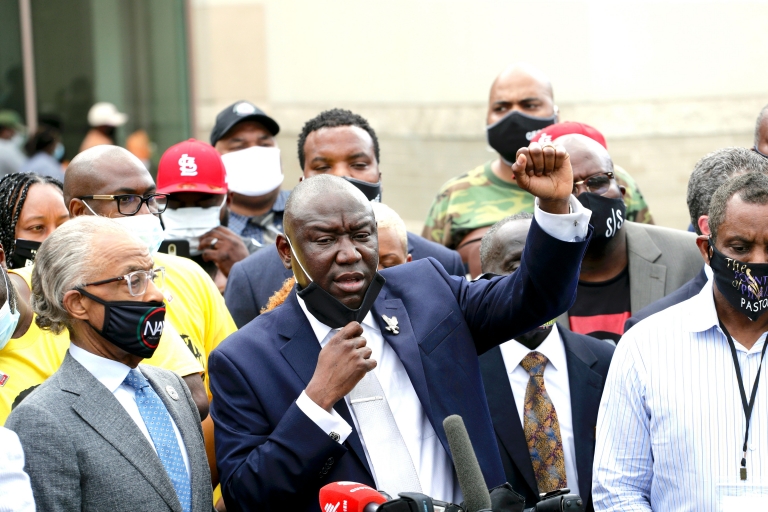 Hordes of protestors have taken to streets all across the U.S. proclaiming that “Black lives matter” in wake of the death of George Floyd. Videos show that the Black Minneapolis man died after being pinned down beneath three police officers for several minutes.

Support for police and criminal justice reform have made recent headlines but, for Equal Justice Now’s Co-founder Tony Smith and national spokesperson Attorney Benjamin Crump, this fight has been long awaited.

As a civil rights attorney, Crump has represented the family’s of prominent figures of the Black Lives Matter movement including Trayvon Martin and more recently Ahmaud Arbery, Breonna Taylor and Floyd.

“Obviously with the cases I’m handling now… we’re advocating for those Black lives [that] mattered and that they deserve equal justice under the law to make sure that their deaths are not swept under the rug,” Crump said.

The Houston-based non-profit organization focuses on educating the public about issues such as wrongful convictions, incarcerations and false arrests. Smith noted that the introduction of Senate Bill 10, a law that would abolish cash bail in California, is another topic that Equal Justice Now emphasizes.

Racial disparities have riddled the U.S. criminal justice system since its inception. According to a 2010 American Civil Liberties Union study, Black people were 3.7 times more likely to be arrested for marijuana possession than White people despite similar usage. Statistics like this are not uncommon for minority communities.

“We believe that someone with a traffic ticket should not have to go to jail, that’s just silly. It’s archaic,” Smith said. “We think that simple possessions of marijuana, nonviolent offenses, these are charges that we do not feel that individuals should have to go to jail for.”

“I don’t believe America has [ever] divorced itself from the notion of having free labor or having slave labor,” Crump said.

According to a 2018 report from the Bureau of Justice Statistics, there were over 2 million people incarcerated in U.S. prisons and jails at the end of 2016. Smith said that there needs to be more comprehensive measures to assure people are treated fairly in court to avoid jail time as opposed to setting people up to “fail instead of succeed.”

“A lot of systems, what they’ll do is they’ll say, ‘Well take this deal and plead guilty and you won’t do any jail time,’” Smith said. “So now the person can’t get a job and they’re in a system where they have to pay all of these fees for probation and parole costs, you know before they can see the light.”

Equal Justice Now normally spreads its message throughout the nation by hosting various events from Super Bowl and NBA All Star weekend parties to award shows honoring people involved in reforming criminal justice. With the onslaught effects of COVID-19, this year’s agenda has been put at a standstill prompting other forms of educating.

“We’re going to put together a podcast that we’re working on right now and hopefully once this is over we’ll begin to set our agenda for the rest of the year so we can continue our work,” Smith said.

Despite the virus, individuals throughout the country have managed to congregate and protest the same issues Equal Justice Now fights for. With heightened civil unrest, more instances of police misconduct are being filmed.

Recently, two Buffalo police officers were charged with assault after a video showed them pushing a 75-year-old protester. Crump believes the treatment of protestors is another example of people’s rights being infringed upon.

“When you look at a lot of mostly people of color exercising their first amendment constitutional rights in the tragic killing of George Floyd, [the police] are shooting pepper spray, they are shooting rubber bullets, they are arresting them, they are calling in the National Guard,” Crump said.

“It’s just a [physical] example of the injustices in every aspect. If you’re a person of color or you’re a marginalized person or you are disenfranchised in this society [by] how you’re treated versus if you’re [someone] who’s presumed to have privilege, whether that’s white privilege or economic privilege, and that’s what Equal Justice Now is rallying against nationwide,” Crump said.

Since the death of Floyd, there have been constant changes to the way police and criminal justice systems in America are functioning.

On Sunday, nine members of the Minneapolis City Council said they intend to defund and recreate the city’s police department, other cities considering similar options. Smith sees this as a positive start to change.

To learn more about the organization visit equaljusticenow.org.

Previous What to Know About Breonna Taylor’s Death
Next Officer who shot Jacob Blake will not face charges, district attorney says